With nearly twenty percent of the world’s population living in India and Pakistan alone, events in the greater South Asia region exert an enormous impact on the international sytem. India’s rising economic strength has been accompanied by increasing political influence, as evidenced by President Obama’s recent visit to the country in November. Pakistan, devastated this summer by the worst flooding in the country in decades, continues to play a complex strategic role in the security of the region. What were the major challenges and triumphs in South Asia over the past year? What will shape the India-Pakistan relationship in 2011? What are the prospects for a positive outcome in Afghanistan as the US and NATO begin to reevaluate their objectives for the coming year?

Gilles Dorronsoro, a visiting scholar at the Carnegie Endowment, is an expert on Afghanistan, Turkey, and South Asia. His research focuses on security and political development in Afghanistan, particularly the role fo the International Security Assistance Force, the necessary steps for a viable government in Kabul, and the conditions necessary for withdrawal scenarios. Previously, Dr. Dorronsoro was a professor of political science at the Sorbonne, Paris and the Institute of Political Studies of Rennes. He is the co-founder and editor of South Asian Multidisciplinary Academic Journal and is the author of Revolution Unending: Afghanistan, 1979 to the Present (2005).

Ikram Sehgal is a defense and strategic analyst from Pakistan. He is Chairman of Pathfinder G4S, Pakistan’s largest private security firm. A former army officer who served in the 1971 war against Bangladesh and India, he is also publisher and editor of the Defence Journal and writes a syndicated weekly column that appears in six countries in fifteen newspapers and magazines. 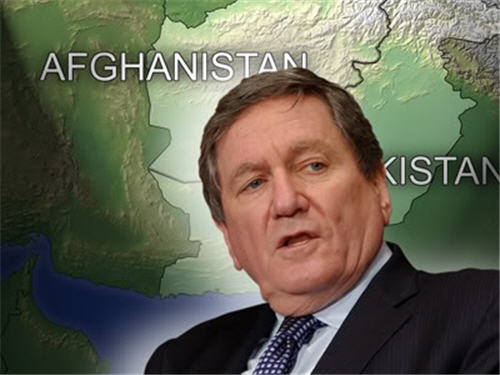 The untimely passage of Ambassador Richard Holbrooke leaves big shoes to fill in the AfPak region. It may take two men to replace him.

In a column that Holbrooke wrote for the Washington Post in March 2008, entitled "Hope in Pakistan: the problems are real, but so is progress" he captured the essence of the US relationship with that "most allied of allies":

Over decades, Washington has usually sent mixed signals to Pakistan. This time the message should be clear and consistent: democracy, reconciliation, the military out of politics, a new policy for the tribal areas — and more democracy.

Holbrooke truly got Pakistan in many ways, even though his tough approach to negotiations sometimes alienated key players on the other side of the table in both Pakistan and Afghanistan. That is what will make it difficult for President Barack Obama to replace him at the critical juncture in the US engagement with the region.
The December 2010 review of the Afghan war is complete and shortly will be shared. No major surprises will likely be observed when it is released on Thursday this week: the main aim is to push any decision making to late spring 2011 or even closer to the July 2011 deadline to begin withdrawing some troops from Afghanistan.
But many issues remain in the region. Pakistan’s economy is on the brink of disaster. The civilian government appears to lack a clear vision and the political will to back its own economic team. The pressures from the International Monetary Fund are forcing some tough actions. But the tenuous coalition government may not be able to withstand the resulting unrest as interest rates will climb even higher, as will inflation. The government has a great opportunity to introduce some real reforms that will improve its growth prospects and fiscal situation. But its political leaders do not seem to want to focus on the longer term. Muddling through seems to be the order of the day at a time when that is not a viable option.
The recent floods that needed a rapid response showed the governments at the center and in the provinces unprepared for action. And when the news of the enormous disaster receded from the headlines, it appears so did the effort to help the millions affected by the foods. Even today, large tracts of land remain under water and a senior international relief worker told me last week in Pakistan that hundreds of thousands of people have yet to see any aid. Were it not for the civil society and private sector largesse, these numbers would be in the millions.
Holbrooke was the human face of the United States in the refugee camps of the internally displaced persons who escaped from violence in Swat last year and in the flood affected areas of three major provinces of Pakistan. This at a time when Pakistan’s own leaders were either abroad or otherwise absent from the scene. Only the military rose to the task in aid of civil power. That is what made his job harder in Pakistan, as he tried in vain to get the civilian leaders to own up to their responsibilities.  Meanwhile at home in the United States, he took to breaking down the silos that existed in the aid agencies and different government departments that needed to get their act together to help Afghanistan and Pakistan.
These are the tasks that face his successor. The list of likely candidates with the experience to fill the job is unfortunately very small. Few possess the knowledge of the region and the major players in each country, and a willingness to tackle the seemingly impossible job of bringing reluctant neighbors together in a common fight against insurgency and militancy. And, in countries with struggling polities, there is also the need to retain a balance in our relations with both the civil and the military. President Obama will need all his persuasive skills to bring back persons of stature, such as Ambassador Ryan Crocker or General Tony Zinni, to carry forward  and help complete the Holbrooke mission. If the President cannot find someone ready or able to be his Special Representative, then this may be an opportunity to revert to relying on two skilled and engaged ambassadors in Kabul and Islamabad and give back to the Department of State the key coordinating role that it deserves. That will be a fitting tribute to this consummate diplomat.
Shuja Nawaz is the director of the South Asia Center at the Atlantic Council.

On Monday, December 13, the South Asia Center held a discussion relating to US policy in the South Asia region with Derek Leebaert, author of “Magic and Mayhem: The Delusions of American Foreign Policy from Korea to Afghanistan.”

Shuja Nawaz, South Asia Center Director, moderated the discussion. In the aftermath of the release of thousands of American diplomatic memoranda by Wikileaks, a variety of issues in US foreign policy are under scrutiny at home and abroad, including in South Asia, where there continues to be uncertainty about the success of US and NATO efforts to establish a secure and stable environment in Afghanistan, and the US still struggles to a strike a balance in its relationships with Pakistan and India. Problems also persist in neighboring Iran, where American officials remain wary of the country’s nuclear ambitions.

Derek Leebaert, who has taught foreign policy at Georgetown for fifteen years, is a partner in the Swiss management consulting firm, MAP AG. His previous books include The Fifty-Year Wound: How America’s Cold War Victory Shapes Our World (2002) and To Dare and to Conquer: Special Operations and the Destiny of Nations from Achilles to Al Qaeda (2006). He is also a coauthor of the MIT Press trilogy on the information technology revolution, and a founding editor of International Security and The International Economy, as well as editorial board member of European Security. He served in the US Marine Corps Reserve and is a director of the US Army Historical Foundation, Providence Hospital in Washington, DC, and of other public service institutions.