The segment focused on events in 2011 that were primarily responsible for the erosion of relations between US and Pakistan.

Listen to the segment and read the transcript

Atlantic Council South Asia Center Director Shuja Nawaz recently assisted in crafting and adopting a list of nuclear confidence-building measures at a meeting in Copenhagen with a group of retired senior officials, military officers, and academics from India and Pakistan.

Led by University of Ottawa Professor Peter Jones, the Ottawa Dialogue has put forth “Practical Steps Towards Nuclear Confidence-building in South Asia,” just as governments in the region begin to discuss nuclear issues related to both military and civilian use.

The Copenhagen meeting was sponsored by the Danish foreign ministry and the National Defense University. Under the leadership of Shuja Nawaz, the South Asia Center at the Atlantic Council seeks to foster partnerships with key institutions in the region to establish itself as a forum for dialogue between decision makers in South Asia, the United States, and NATO. 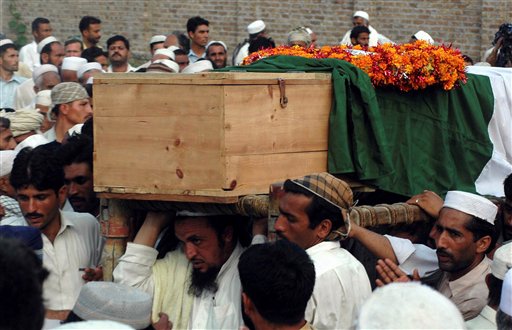 to discuss whether there will be a change in the dismal state of deteriorating relations between the U.S. and Pakistan, following the announcement by Pentagon that mistakes were made by NATO that resulted in the recent deaths of 24 Pakistani soldiers.

Who Controls Pakistan’s Security Forces?” This report reflects the views expressed during a conference hosted by the U.S. Institute of Peace’s Security Sector Governance Center on April 19, 2011. Speakers at the event included the author, Professor Hassan Abbas of Columbia University, and Moeed Yusuf of the U.S. Institute of Peace. The report discusses the complex political landscape in which Pakistan’s civilian and military authorities operate, often vying for power and supremacy; identifies the challenges facing Pakistan’s civilian government in the face of the military’s expanding role; and suggests a realignment of roles, increased expertise for civilian officials in security matters, and better civilian-military coordination.

Read the report at USIP

Shuja Nawaz, director of the Atlantic Council’s South Asia Center, was featured on the first panel at the Brookings Institution event “Looking to the Future of Pakistan,” which launched a new report evaluating several possible outcomes of Pakistan’s future role in global affairs.

After a week of delay, as anger against the United States mounted inside Pakistan over the November 26 attack by U.S. forces that killed two officers and 22 soldiers of the Pakistani army at border posts Volcano and Boulder in Mohmand agency, the President of the United States finally entered the picture directly.

He called Pakistan on Sunday to express his sorrow at this incident that is threatening to take the teetering Pakistan-U.S. alliance off the precipice. According to the White House:

Earlier today the President placed a phone call to Pakistani President Asif Ali Zardari to personally express his condolences on the tragic loss of twenty-four Pakistani soldiers this past week along the border of Afghanistan and Pakistan. The President made clear that this regrettable incident was not a deliberate attack on Pakistan and reiterated the United States’ strong commitment to a full investigation. The two Presidents reaffirmed their commitment to the U.S.-Pakistan bilateral relationship, which is critical to the security of both nations, and they agreed to stay in close touch.

About time, many would say, that the President got involved in saving this relationship. The signaling effect of his personal intervention is huge, especially since it follows a “business as usual” approach to the promised investigation up until now. The U.S. Central Command had said it would take three weeks to produce a report on this incendiary incident that has led to the formal closing of the ground line of communication into Afghanistan and the removal of U.S. personnel from Shamsi air base in Balochistan — a delay that allowed the wounds to fester inside Pakistan.

But why did President Obama call President Asif Ali Zardari and not Prime Minister Yousaf Raza Gilani? Pakistan has had a parliamentary system of government since April 8, 2010, when President Zardari was reduced to a mere constitutional figurehead. Prime Minister Gilani now heads the government, and indeed has been the point-man in denouncing the United States in the days following the Mohmand attack. He should have been the one that President Obama called. By calling President Zardari, President Obama may have been led to the source of political power in the Pakistan Peoples Party to which both Zardari and Gilani belong. A pragmatic move perhaps in light of Zardari’s tight hold over the party he took over from his murdered wife Benazir Bhutto, but also one that downgrades the prime minister. This call will likely be seen in the eyes of many Pakistanis as a snub of their constitutional system.  By this logic, they might ask, would President Obama call President Pratibha Patil or Mrs. Sonia Gandhi in India rather than Prime Minister Manmohan Singh?

The United States has been trying to forge a long-term and consistent relationship with Pakistan during the Obama administration. But 2011 has been the annus horribilis between these two estranged allies. The Pakistani government has used the recent attack to stoke public anger and garner support for its tough stance against the United States, partly to counter the power and prestige of the military in the public’s eyes. The feedback loop created by government and the army’s own tough language against the United States will make it difficult for either to resile from its position. The signaling effect of President Obama’s call to the President of Pakistan and not to the Prime Minister may well magnify that divide and be felt in Pakistani politics and on the street, where every nuance of words coming out of the White House is parsed and debated.

Recall that President Zardari’s personal popularity has been sinking, and with it his ability to affect public opinion in Pakistan. The Pew Global Survey of June 2011 had his popularity at 11 percent. A later Gallup Pakistan poll of July 2011 had his negative rating 39 percent. Gilani came out better, with 29 percent negativity rating overall, but also in the red. In the same Gallup survey, the Pakistan army got an approval rating of 15 percent in fighting terrorism. But the people of Pakistan also gave it a negative rating of 12 percent in running the country and a 3 percent negative rating in its political activities. Yet the military seems to be calling the shots on foreign policy, especially after its recent losses at the hands of U.S. forces.

If the United States is to mend its relations with Pakistan, it must recognize the need to heed the wishes of the people of Pakistan and to connect with them more than the political leaders who appear to have lost the confidence of their citizens. Turning back the clock to the Musharraf regime, when the President of Pakistan was the be-all end-all of decision making, is not the best move. President Obama can retrieve the situation by accelerating the investigation into the November 26 attack and sharing credible evidence with Pakistan of what happened and why. And, if it turns out that it was a mistake on the part of the coalition and U.S. forces that caused the tragedy at Volcano and Boulder, an apology would be in order. Better that than having to put together a new policy for the troubled South Asian region without Pakistan.

Shuja Nawaz is director of the South Asia Center at the Atlantic Council in Washington DC. This piece was also published on Foreign Policy.