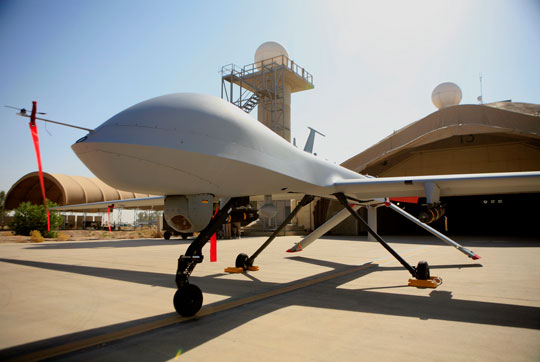 On May 31st, Shuja Nawaz, director of the Council’s South Asia Center, appeared on WAMU 88.5 The Diane Rehm Show to discuss the legal and ethical issues over US drone attacks.

Listen to the program on TheDianeRehmShow.org

On May 30, the Atlantic Council’s South Asia Center held a public discussion on “India-US Strategic Dialogue: Expanding Horizons of Bilateral Partnership,” with H.E. Nirupama Rao, ambassador of India to the United States.

The fundamental interests of the United States and India converge on most matters of strategic importance, placing the India-US partnership on a positive trajectory. This sustained, productive strategic partnership is based on shared prosperity, democratic values, and solving global and regional problems in an interconnected world. What are the key drivers of an expanding and multi-dimensional India-US partnership? Can the United States and India build on their partnership through increased trade, development initiatives, and security cooperation in the Asia-Pacific region? Ambassador Rao answered these questions among others, and addressed how this strategic partnership can be taken to a new level.

Mrs. Nirupama Rao assumed her responsibilities as ambassador of India to the United States in September 2011.

On completion of her University studies, and with a MA in English literature, she joined the Indian Foreign Service in 1973. In a diplomatic career spanning over three decades, she served in various world capitals, including Washington, Beijing and Moscow. She acquired extensive experience in India-China relations, having served in the East Asia Division of the Ministry at policy level capacities for several years, and later served as India’s first woman ambassador to China from 2006 to 2009. Her other ambassadorial assignments include Peru and Bolivia, and Sri Lanka (where she was India’s first woman high commissioner).

Mrs. Rao served in Washington as minister for press and cultural affairs at the Indian Embassy from 1993 to 1995. Shortly after, she also served in Moscow as deputy chief of mission from the Embassy of India. On return to New Delhi in 2001, she became the first women Indian foreign service officer to hold the post of spokesperson of the Ministry of External Affairs.

On completion of her tenures in Sri Lanka and in China, she was appointed foreign secretary, the highest office in the Indian Foreign Service, where she served a two-year term until July 2011.

Ambassador Rao was a fellow at the Centre for International Affairs (now the Weatherhead Centre) at Harvard University in the early 1990s. She was also a distinguished international executive in residence at the University of Maryland in 1999-2000.

Ambassador Rao is married to Sudhakar Rao, a distinguished civil servant and former member of the Indian Administrative Service who retired as the chief secretary of the State Government of Karnataka. They have two sons, Nikhilesh and Kartikeya.

On May 29, the Atlantic Council’s Iran Task Force hosted an in-depth review of the Iran nuclear talks that took place in Baghdad on May 23.

These talks follow on discussions in Istanbul April 13-14, between Iran and the five permanent members of the United Nations Security Council plus Germany (P5+1) that were relatively positive. Nevertheless, there are concerns whether a “step-by-step approach” to de-escalating the nuclear crisis with Iran can be achieved. Iran is looking to the international community to ease draconian sanctions, but US flexibility is limited, especially in a presidential election year. Additionally, Israel has a more restrictive view of the Iranian nuclear program than some in the United States and Europe. Panelists analyzed the converging and conflicting interest of the P5+1, Iran, Israel, as well as explore repercussions should negotiations fail.

David Albright is founder and president of the Institute for Science and International Security (ISSI) in Washington, DC. A physicist and former UN arms inspector, Albright has written numerous assessments of nuclear weapons programs throughout the world. He has co authored five books, including the 1992 and 1996 versions of World Inventory of Plutonium and Highly Enriched Uranium, (SIPRI and Oxford University Press); Challenges of Fissile Material Control (ISSI Press, 1999); Solving the North Korean Nuclear Puzzle (ISIS Press, 2000); and Peddling Peril: How the Secret Nuclear Trade Arms America’s Enemies (Free Press, 2010).

Barbara Slavin is a senior fellow at the Atlantic Council’s South Asia Center and Washington correspondent for Al-Monitor.com, a new website devoted to news from and about the Middle East. The author of a 2007 book, Bitter Friends, Bosom Enemies: Iran, the US and the Twisted Path to Confrontation, she is a regular commentator on US foreign policy and Iran on NPR, PBS, and C-SPAN. A career journalist, Slavin previously served as assistant managing editor for world and national security of The Washington Times, senior diplomatic reporter for USA Today, Cairo correspondent for The Economist, and as an editor at The New York Times Week in Review.

The Iran Task Force, co-chaired by Atlantic Council Chairman Senator Chuck Hagel and Ambassador Stuart E. Eizenstat, seeks to perform a comprehensive analysis of Iran’s internal political landscape, its role in the region and globally, and any basis for an improved relationship with the West. Please click here for more information about the Iran Task Force.

The Iran Task Force is generously sponsored by the Ploughshares Fund.

The Atlantic Council’s South Asia Center held a discussion about “Afghanistan in Transition: Power Dynamics” with Nick Dowling and Mariam Atash Nawabi on May 16.

“Afghanistan in Transition” focused on the importance of incorporating regional players, strengthening civil society, and increasing economic development to ensure a stable Afghanistan. Speakers discussed progress and challenges for US engagement in Afghanistan and the dynamics of US-Afghan relations for the next ten years.

Nick Dowling is a former National Security Council official under the Clinton Administration and the current president of IDS International (www.idsinternational.net), a “smart power” national security firm that trains US Army and Marines on complex operations. He leads an IDS team with a wide range of stability operations, interagency, reconstruction and regional expertise. Mr. Dowling is a lifetime member of the Council on Foreign Relations and a member of the Army Education Advisory Council.

Mariam Atash Nawabi is an attorney and adjunct professor of Law at the University of La Verne College of Law and president of AMDi International. She has been a television anchor and host of Pul, a show produced by American Abroad Media broadcast in Afghanistan. Prior to these roles, she was senior advisor to the Afghan-American Chamber of Commerce and Commercial Counsel to the Embassy of Afghanistan in Washington, DC where she worked on policy issues, private sector development, women’s entrepreneurship, commercial law reform, and training and capacity building programs.

The Atlantic Council’s South Asia Center and the Muslim Public Affairs Council, held a discussion with Mehdi Hasan, senior editor (politics) at the New Statesman and author of Ed: The Milibands and the Making of a Labour Leader. The session was moderated by Shuja Nawaz, director of the South Asia Center.

Mr. Mehdi Hasan, a prominent UK political writer, focused on the complex dynamic that exists between Muslim communities in Europe and the United States and the foreign policies related to their countries of origin.

Prior to joining the New Statesman, Mr. Hasan was with Channel 4 as editor, in the news and current affairs department. He was also the deputy executive producer for Sky TV’s Sunrise, as well as being a producer for BBC1’s the Politics Show.

What a difference a year makes! Today school children play cricket on the ground where a year ago Osama Bin Laden lived…and died. The sun is shining in Abbottabad. But clouds fill the horizon for the United States-Pakistan relationship.

It will take a bold move by President Barack Obama to restore that once promising partnership. Nothing less will assuage the hurt that Pakistan felt after the cumulative effects of events of 2011 that took its relations with the United States into a downward spiral. An apology for the November 26 attack on two Pakistani border posts is a risky venture in an election year but so is the possibility of a rupture in relations with Pakistan at a key stage in the Afghan war.

No matter what Obama does, the onus is also on Pakistan if it wishes to move forward. It is fighting a costly war inside its own borders and is inextricably linked to the war next door in Afghanistan. It has already paid a heavy price in terms of lives lost and the economic costs of being a partner in the Afghanistan conflict. Al Qaeda still likely has its headquarters inside Pakistan proper. Meanwhile the Tehreek-e-Taliban of Pakistan (TTP) continues to fight the state. It would do well for Pakistan’s military and civil intelligence services to begin to work together to find and capture Ayman Al Zawahiri before the Americans do. For if the US gets to him first, there will be a reprise of the Abbottabad raid. Pakistan has the resources, if properly employed, to track down the leadership of the TTP and decapitate that organization. Why have they not shown results? For their own sake?

In the hinterland, a more serious threat remains from the Punjabi Taliban, which is neither controlled nor controllable and a constant obstacle to improved relations with neighboring India and now the United States. Legal authorities in Pakistan suggest that changes in regulations need to be made to allow the government to apprehend and proceed against the leaders of the Lashkar-e-Taiba and other militant organizations. Changes in laws may take longer but are also necessary. The army reportedly sought such legal advice in the past year or two. Is the government also doing so and can the army and the government act in unison on this issue?

Meanwhile the National Counter Terrorism Authority still lies in limbo, inside the files of the Ministry of Interior. It is an opportunity that is being missed. A civilian-led and coordinated effort under the prime minister affords the best chance of establishing leadership in the battle for Pakistan that is going on in the streets and countryside of that embattled nation. It may also be time now to re-establish the National Security Council under strong leadership and supported by adequate staff and other resources so the government may benefit from its advice. And establish ownership of security matters. The streets of Karachi and Quetta are a daily battle ground this week. Tomorrow, it may be Lahore, Peshawar, or Islamabad. Will Pakistan continue to blame external forces for its inability to protect its citizens and serving as a safe haven for domestic and foreign criminals operating in the name of Islam?

Osama Bin Laden may be dead but the seeds of terror that he and misguided government policies of the past helped plant are sprouting all over Pakistan today. Who will lead the charge?

Shuja Nawaz is director of the South Asia Center at the Atlantic Council.