The Atlantic Council presents the executive summary from its new report, Pakistan in the Danger Zone: a Tenuous U.S.-Pakistan Relationship by Shuja Nawaz, Director of the Council’s South Asia Center.
Download the PDF 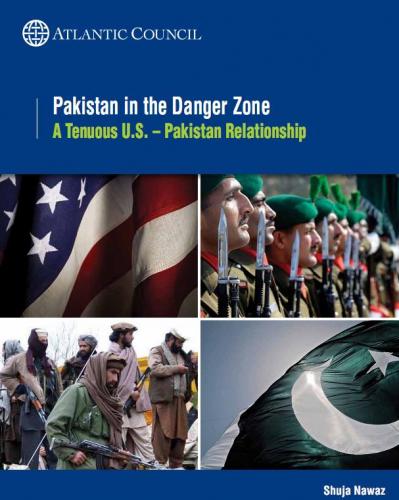 The Afghanistan war may be lost on the battlefields of Pakistan, where a vicious conflict is now being fought by Pakistan against a homegrown insurgency spawned by the war across its Western frontier. A year after we at the Atlantic Council raised a warning flag about the effects of failure in Afghanistan and the need to meet Pakistan’s urgent needs in its existential war against militancy and terrorism, the situation in Pakistan remains on edge. Domestic politics remain in a constant state of flux, with some progress toward a democratic polity overshadowed by periodic upheavals and conflicts between the ruling coalition and the emerging judiciary. The military’s actions against the Taliban insurgency appear to have succeeded in dislocating the homegrown terrorists but the necessary civilian effort to complement military action is still not evident.  The government does not appear to have the will or the ability to muster support for longer-term reform or sustainable policies. The economy appears to have stabilized somewhat; but security, governance, and energy shortages are major challenges that require strong, consistent, incorruptible leadership rather than political brinkmanship, cronyism, and corruption that remains endemic nationwide. Recent constitutional developments offer a glimmer of hope that may allow the civilian government to restore confidence in its ability to deliver both on the domestic and external front. But the government needs to stop relying on external actors to bail it out and take matters into its own hands.

Unless some game-changing steps are taken by both sides, the U.S.-Pakistan relationship may also be heading into another serious downturn, marked by continuing mistrust and a disconnect between the public posturing and private dialogues. The United States and Pakistan appear to have different objectives while speaking about common goals: while both are fighting terrorism and militancy, the U.S. is looking for a safe military exit out of a stabilized Afghanistan while ensuring that Al Qaeda does not re-emerge. Pakistan seeks to secure its own territory against an active homegrown insurgency, while keeping a wary eye on India to its east.   Increasingly, domestic political imperatives seem to be coloring the rhetoric and pushing policy between these two allies. The 2010 mid-term elections and a sputtering economy at home feed the U.S. desire to end the Afghan war. An unfinished transition from autocratic presidential rule to a parliamentary system in Pakistan that pitted the civilian president against the military and other political parties in Pakistan has hamstrung Pakistani politics.  The European allies in Afghanistan have been missing in action in Pakistan. They have not been able to establish their own relationship with Pakistan in a manner that would engender mutual trust and confidence. They have a minimal presence on the economic development scene in this key country bordering Afghanistan.

Pakistan can begin to turn things around if given the resources and the support it needs from the United States, the international financial institutions, and other friends. But it will also have to take on some major tasks itself, to reorder the political system, rearrange its economic priorities, and truly return power to the people and their representatives. But without tackling these daunting tasks, Pakistan risks political and economic slide. The nexus between security and governance remains critical. Pakistan’s civilian government must begin to govern and to prosecute the war against militancy on a war footing, not as a part-time activity or a purely military venture outsourced to its army. It must take control of strategy and work with the military to prepare to take over territory that the military wrests back from the insurgency. Now that it has removed some of the constitutional vestiges of the regime of President General Pervez Musharraf, it must also complete the transition from the presidential to a parliamentary system and build on the recently concluded concord between the provinces and between the center and the provinces, under the aegis of the National Finance Commission Award. It must re-order its priorities to revive domestic investment and attract foreign investment. And it must be prepared to plan for effective use of foreign aid. President Asif Ali Zardari has an opportunity to show statesmanship as the constitutional head of state but without the extraordinary powers that he inherited from his military predecessor. In order to do this he will need to build viable longer-term coalitions and change the negative perceptions about himself among the general population.

The United States needs to take some immediate actions to open up its markets to more Pakistani exports by reducing tariffs on Pakistan’s exports, as it has done for dozens of other countries across the globe. It must truly roll back the stringent visa restrictions and undue checking of travelers from Pakistan, a move that has further enraged public opinion, especially among the middle class. In other words, the United States must begin to treat Pakistan as an ally so Pakistan can return the favor. For the longer run, it needs to shift to visible and effective heavy infrastructure development and energy investments, and begin investing in the signature projects in the education and health sectors that will not only have longer term impact but also be visible to the general public as a result of U.S. assistance. On the military front, the U.S. needs to provide Pakistan the tools it needs to fight the war against militancy: more helicopters, more protection for its forces; better police and Frontier Corps training, and greater interaction with middle and lower ranking officers, through exchange programs, for example and not just short courses and visits. The flow of military hardware has been spotty at best and certainly not in the volume that would meet or exceed Pakistani expectations. The biggest game changer in terms of public perception will be discussion of an energy-oriented civilian nuclear deal with Pakistan that will treat it on par with neighbor India, but at the same time begin to draw it into the safeguards network of the International Atomic Energy Agency and thereby dissuade it from any recidivist tendencies toward proliferation. At the same time, removal of U.S. pressure against an Iran-Pakistan oil pipeline that could be extended to India would be seen as a positive step toward helping the US’ friends in South Asia.

The United States should also use its new status as a strategic partner of both India and Pakistan to bring the two neighbors together to pick up on the resolution of solvable disputes while reducing tensions on issues that may require more time to mature. Providing help in making their common counter terrorism approaches more effective may be one way to build mutual confidence between these two key neighbors. Finally, the United States and its allies can help India and Pakistan see the importance and great economic value of open borders, transit trade, and economic ties between South Asia, Afghanistan, and Central Asia. Governments in the subcontinent need to catch up with their public opinion that favors peace over confrontation in the subcontinent.

2009 was marked by missed opportunities in both Pakistan and the United States: many good intentions were undermined by subsequent actions. A generous, long-term aid bill (Kerry-Lugar) was saddled with “principles” that were read in Pakistan as conditions while the requirement of “waivers” were interpreted as threats similar to past U.S. sanctions. Delays in processing Coalition Support Fund (CSF) reimbursements continued to be the source of unhappiness on both sides. The CSF approach remains flawed and creates a serious impediment in building up a relationship between the two “allies”. Suspicions about U.S. boots on the ground in Pakistan and subsequent delays in visas for aid-related personnel add to the discomfort. Chances of serious miscalculations are still strong. But all is not lost, if leaders in both the United States and Pakistan, and civil society in both countries better understand each other’s concerns and intentions, and work together honestly and openly to resolve difficulties. If they do not, the loss of Afghanistan may be overshadowed by a Western break-up with Pakistan and that may well portend a collapse of the fledgling political system inside Pakistan.