Heavy defense spending and economic non-cooperation between India and Pakistan are detrimental to the welfare of the citizens of the two neighboring countries, argues a report released by the Atlantic Council’s South Asia Center on Thursday. 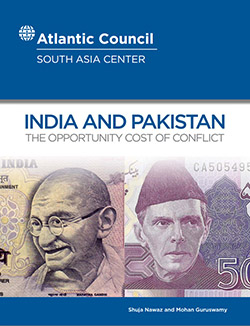 At a briefing and launch of the report, India and Pakistan: The Opportunity Cost of Conflict, Authors Shuja Nawaz, director, South Asia Center, Atlantic Council and Mohan Guruswamy, nonresident senior fellow, South Asia Center, Atlantic Council, lamented that South Asia is the least economically integrated region in the world, mainly due to lingering territorial and political conflicts between India and Pakistan. This conflict has not only posed huge military expenditures on both countries, but has also significantly hampered economic cooperation. Guruswamy, speaking from New Delhi via Skype, maintained that the cost of economic non-cooperation was far greater than the military expenditure born by the historical rivalry.

Guruswamy mentioned examples of China and Japan, India and China, Russia and the United States, and other countries who maintained trade and economic relations despite territorial conflicts and political differences. The volume of indirect trade between India and Pakistan was around $18 billion, while direct trade remained at just $2 billion. Guruswamy argued, economic cooperation will lead towards increased direct trade, which will in turn benefit the two countries and save them from freight and transportation costs.

Citing research studies conducted by two eminent economists, Pervez Hassan and Shahid Javed Burki, Nawaz stated that had Pakistan reduced defense expenditures between 1970 to 2010, it could have added 2-2.5% yearly growth to its Gross Domestic Product (GDP). India could have seen a similar rate of growth had it opted to decreased defense spending, Nawaz maintained.

Highlighting potential areas of trade between the two countries, Guruswamy said that New Delhi alone could import 300 trucks of fruits and vegetables from Pakistan on daily basis, and India can replace a number of electronic items at half the price that Pakistan was spending on imports from distant countries.

Moreover, India and Pakistan can take several steps to build confidence and trust on both sides of the border that will lay the foundation for greater economic cooperation. Both countries should increase the distance between land forces deployed on their respective borders. More channels should be provided to strengthen people to people relations, and militaries on both the sides should engage in direct communications, such as through exchange visits. The two countries should jointly invest in energy, water, and export industries, and borders should be opened for trade. Nawaz maintained that opening the border for trade will eventually lead to greater ease in tourism visits.

“Economically intertwined and mutually beneficial economic systems in both countries will create a huge peace and development constituency that will not only be good for the two nations, but also for the region and the entire world.”