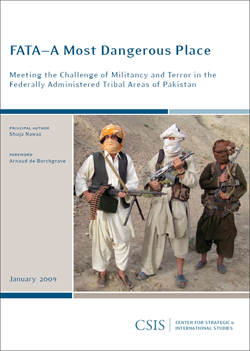 Increased militancy and violence in the border region between Afghanistan and Pakistan known as the Federally Administered Tribal Areas of Pakistan has brought FATA into sharper focus, as U.S., Afghan, and Pakistani leaders attempt to find solutions to the problems underlying the situation there. This most dangerous spot on the map may well be the source of another 9/11 type of attack on the Western world or its surrogates in the region. Should such an attack occur, it likely will be spawned in the militancy that grips FATA and contiguous areas in Afghanistan and Pakistan today. The principal actors are the Taliban, in both countries; their allies—former Soviet-era mujahideen commanders including Gulbadin Hekmatyar of the Hezbe Islami and the Haqqani group (headed by Jalaluddin and his son Siraj); Sunni militants from Central and Southern Punjab; and al Qaeda, which benefits from links to most of these insurgents. The Taliban leader Mullah Omar is suspected to be hiding in southwestern Afghanistan and Pakistani Balochistan. The Taliban are engaged in a struggle against foreign forces inside Afghanistan and now against the military in Pakistan. Hekmatyar has spoken against the Pakistani government but has not yet taken up arms against it. The Haqqanis have also not provoked a battle with the Pakistani forces as yet. The Punjabi militants, however, have become franchisees of al Qaeda and have been linked to attacks on the Pakistani state and its army.

While many ideas have been put forward for tackling the issues facing FATA, too often they rely on longer-term plans and solutions. This report attempts to define the conditions that spawn militancy and violence among the Pakhtun tribesmen that inhabit FATA and suggest practicable ways of approaching them in the short and medium term. Concrete actions by the principal actors—the U.S., Afghan and Pakistan governments and the U.S. and Pakistan militaries—are suggested. These will need to be underpinned by a national debate in Pakistan, in particular, on the nature of the country’s polity and the need to tackle terrorism and militancy as domestic issues. But the debate will need to be rooted in a clear consensus among the civil and military leadership on the nature of the Pakistani state and society and how to tackle the growing militancy inside the country and in broad-based support from major political parties and the general public. The United States needs to forge a longer-term relationship with Pakistan and its people, shifting from a transactional relationship to one built on strategic considerations and respect for Pakistan’s political and development needs. Failure to bring peace and to restore a modicum of stability to FATA will have widespread repercussions for the region and perhaps the world.

This report by a team sponsored by the Center for Strategic and International Studies of Washington DC was released on January 7, 2008. The principal author is Shuja Nawaz.

You can download the report as a PDF file: FATA – A Most Dangerous Place

The video and audio can be reached at http://www.csis.org/component/option,com_csis_events/task,view/id,1893/