Based on interviews with civil and military officials and politicians, this report details the poor governance and imbalance of power in Pakistan and offers key recommendations for the military, civilian institutions, parliament, and civil society to achieve the goals and objectives outlined in Pakistan’s National Action Plan (NAP). The need for an assessment of the National Internal Security Policy and subsequent NAP became evident as the heightened military action under Operation Zarb-e-Azb entered its second year. Much remains unclear due to the lack of transparency in operations of both civil and military institutions and the absence of active parliamentary oversight. 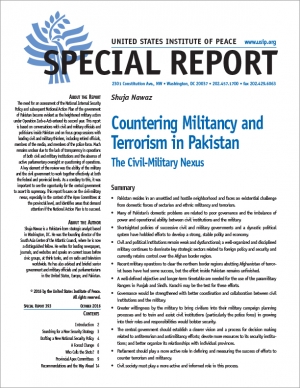 The need for an assessment of the National Internal Security Policy and subsequent National Action Plan of the government of Pakistan became evident as the heightened military action under Operation Zarb-e-Azb entered its second year. This report is based on conversations with civil and military officials and politicians inside Pakistan and on focus group sessions with leading civil and military thinkers, including retired officials, members of the media, and members of the police force. Much remains unclear due to the lack of transparency in operations of both civil and military institutions and the absence of active parliamentary oversight or questioning of operations. A key element of the review was the ability of the military and the civil government to work together effectively at both the federal and provincial levels. As a corollary to this, it was important to see the opportunity for the central government to assert its supremacy. This report focuses on the civil-military nexus, especially in the context of the Apex Committees at the provincial level, and identifies areas that demand attention if the National Action Plan is to succeed.

Shuja Nawaz is a Pakistani-born strategic analyst based in Washington, DC. He was the founding director of the South Asia Center of the Atlantic Council, where he is now a distinguished fellow. He writes for leading newspapers, journals, and websites and speaks on current issues before civic groups, at think tanks, and on radio and television worldwide. He has also advised and briefed senior government and military officials and parliamentarians in the United States, Europe, and Pakistan.