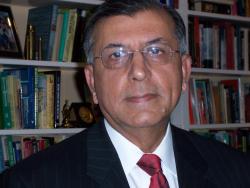 Video courtesy of the U.S. Senate.

Mr. Chairman, Ranking Member Senator McCain, members of the subcommittee: I am honored to appear before you today to share my thoughts with you on what works and what could work in Pakistan, and how we can make the United States a better partner in building Pakistan safer and stronger. I speak as a Pakistani but also as someone who has lived and worked in the United States since 1972.

While the situation in Pakistan may appear bleak, it is not hopeless. I remain optimistic. Yet there is cause for concern. As a friend of mine reminds me often: a pessimist is simply an optimist with experience.

Pakistan is a complex country, struggling nearly 62 years since independence to define its nationhood. Repeated military and autocratic rule, both civil and military, have left its key institutions stunted. The limitations of its military rulers have been matched by the incompetence and short-sightedness of its civil leadership. Most political parties are run as personal fiefdoms and family businesses, or on feudal patterns. Rarely do they allow internal democratic systems to emerge. Ironically, only the major religious party, the Jamaat i Islami, actually holds elections at various levels and routinely elects new leaders from the rank and file.

I welcome President Obama’s and the US Congress’ moves to change the relationship with Pakistan to focus on a longer-term commitment to the people of Pakistan, not an alliance with any single person, party, or institution.  In this season of bipartisan support for help to rebuild Pakistan and reshape US policy, I offer below some information and suggestions.

How can the US become more effective?

How do we track aid monies and make their use transparent?

I believe in accountability and responsible use of domestic and foreign funds. Pakistan does not have the ability to track its civil or military expenditures effectively. We must help Pakistan create these systems so it can better manage its resources. A comprehensive financial tracking system in the Ministries of Finance and Defence should help not only management but also improve civilian control of military spending, while increasing transparency. It is in Pakistan’s interest to set up strong management of aid programs and independent monitoring entities to prevent misuse of aid by bloated bureaucracies. The Pakistani Diaspora can provide the backbone for such efforts. On its part the US government must make transparent all its aid and defense contract awards so both the US and Pakistani populace can track the use of aid monies.

Mr. Chairman, I return to the complexity of Pakistan, its strategic choices and external and domestic challenges. Understanding its regional insecurities, the US must work behind the scenes to understand Pakistan’s security concerns and to alleviate them. India is a key player in the region. Fro the first time in years, a strong central government has been elected in India. The US must use its new influence with India to show, in the words of my friend Peter Jones, “Strategic altruism”. Confidence building measures need to be picked up and the Track II channels that brought the two countries close to solutions of at last three of their major four issues of contention two years ago need to be revived. Both India and Pakistan must leap frog the hurdles of historical distrust and conflicts to fight the common enemies of poverty, terror, and religious extremism. There is no acceptable alternative to this direction.